(Ottawa – April 20, 2017) A coalition of community representatives and parents joins the Vaughan African Canadian Association (VACA) and the National Council of Canadian Muslims (NCCM) in expressing relief that the York Region District School Board (YRDSB) has terminated its Director of Education. 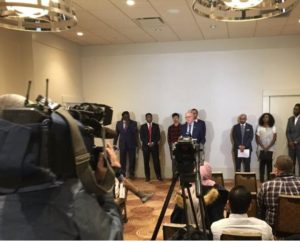 Community representatives and families formed a coalition to advocate for change at YRDSB last fall.

The announcement came just days after a ministry-mandated review found systemic problems in the board, specifically highlighting a failure of leadership.

“This isn’t a victory but a moment to step back and realize that it took months of community engagement and advocacy to get to the point where the board would finally begin to do right by its students,” says NCCM Communications Director Amira Elghawaby. “It’s bittersweet because it took so long for decision-makers to respond to what families had been saying for several months.”

“This has been an exhausting and draining experience for so many families,” says VACA Executive Director Shernett Martin. “Thankfully, communities came together to support inclusive education for children of all backgrounds and that’s what we celebrate today: the power of unity.”

“Without the Minister of Education, the reviewers, and communities listening to our concerns, nothing would have changed,” says Naeem Siddiqi, a representative from YRDSB Kids, a coalition of concerned parents. “This decision is proof that the system can work – but that it needs a lot of pressure to do so. We hope that the reviewers’ recommendations will help make sure that when problems arise, there are expedient ways to address them so that families aren’t left in the lurch. We also hope the recruitment process for a new director will be transparent; we look forward to working with the board trustees to re-establish trust.”

“We hope that real change can now truly begin,” says Garth Bobb, one of the parents who filed a human rights complaint against the board. “This is not the end of the story, but a fresh beginning.”

“I just want to hug my son,” says Charline Grant, Bobb’s wife. “This was for him, and all the other students like him who just want to be treated with fairness and with dignity.”