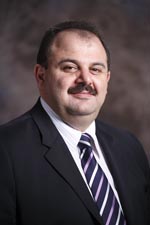 A prominent community leader and businessman from Edmonton, AB, Khalid Tarabain is president of the Canadian Islamic Centre (Al Rashid Masjid), the oldest established mosque in Canada, and serves as Chairman of the Board of Trustees of the Edmonton Islamic Academy, a first-of- its-kind facility in North America to utilize both contemporary and Islamic architecture.

Khalid is a co-founder of the Edmonton Council of Muslim Communities and he has been deeply involved in community work and interfaith engagement.  He is a recipient of both the Alberta Centennial Gold Medal and the Alberta Volunteers Award from the Government of Alberta honouring his milestone contributions and volunteer efforts for the success of the local Muslim community.  Khalid is the founder of the liaison committee between the Muslim community and the Edmonton Police Service which is now called the Chief’s Advisory Council.