Accountability Report: One Year After the National Action Summit Against Islamophobia

Accountability Report: One Year After the National Action Summit Against Islamophobia

More Muslims have been killed in targeted hate attacks in Canada than any other G-7 country between 2017-2021 because of Islamophobia.

That fact was taken to heart outside the London Muslim Mosque on June 8, 2021, when thousands of Londoners and people from different parts of the country gathered in the aftermath of the attack that took the lives of four members of the Canadian Muslim community in a shocking act of Islamophobic violence.

The London Muslim community, the NCCM, and hundreds of organizations across Canada joined voices to call on all levels of government to take action to address the harms of violent and systemic Islamophobia.

The federal government responded to that call and convened the National Action Summit on Islamophobia on July 22, 2021. Muslim organizations from British Columbia to the Maritimes representing diverse voices presented recommendations for action at the sum- mit which took place for several hours over the better part of a day. Muslim leaders met with Prime Minister Justin Trudeau, several cabinet ministers including the ministers of Justice, Public Safety, Heritage and others.

Our one year Accountability Report shows exactly which governments across the country have committed or passed various recommendations. Although much has been done, much more remains.

None of this is possible without your support. We need you with us now more than ever. Islamophobia kills. It’s time for more action, not words.

View our full report by clicking the image below: 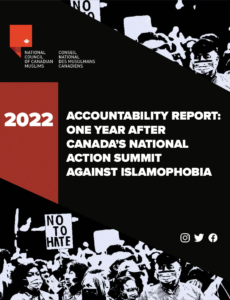